The Real Reason For Our Budget Deficit 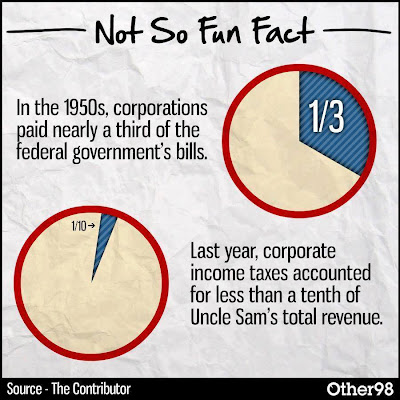 The Republicans would like for Americans to think that we have a large budget deficit because the poorest Americans (along with children, the elderly, and the unemployed) are taking too big a bite out of the federal pie. That's ludicrous. The real reason is because the corporations (and the rich) are no longer paying their fair share of the tax burden.

In the 1950's, corporations provided nearly 1/3rd of the government's tax revenue. Today, they provide less than 1/10th. That's because the Republicans have given them numerous tax loopholes and unneeded subsidies, rewarded them with tax breaks for shipping jobs overseas, and rewritten tax laws to allow them to hide profits overseas to avoid paying taxes on them. Now it is not unusual for a company making many millions or even billions in profits to pay no taxes at all (or to pay a smaller percentage than a middle class worker pays).

And the same is true for the richest individuals. Because of tax loopholes, unneeded deductions, and a special capital gains tax rate, the richest Americans are able to get away with paying a smaller rate in taxes than working Americans. This is inexcusable -- and it is the direct result of the failed trickle-down policies of the GOP.

Now, to pay for those giveaways to the rich and the corporations, the Republicans want to cut Social Security benefits, abolish Medicare, cut food stamps and meals for poor school children, cut unemployment benefits, cut funds for education, and deny health care insurance to Americans. In other words, they want to pay for their generosity to the rich by punishing all other Americans.

And it is not just the congressional Republicans who are to blame for this economic mess we are in. Every single person who continues to vote Republican (knowing the above policies of the GOP are true) must share that blame. Anyone who really wants a balanced budget (Clinton had a budget surplus) and a healthy economy that benefits all citizens, needs to stop voting Republican -- because every Republican vote is a vote for the rich, and against all other Americans.
Posted by Ted McLaughlin at 12:02 AM