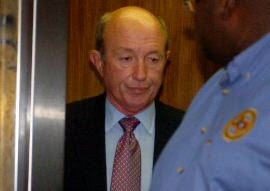 About 4:30pm on Thursday, the jury in the trial of Potter County Sheriff Mike Shumate retired to consider their verdict. Seven hours later, they returned with a guilty verdict. They convicted him of receiving bribes from a company that wanted the commissary contract for the Potter County Detention Center (County Jail). The jury acquitted him of two charges of violating campaign law. Evidently, they didn't think he used any of the bribery money for his political campaigns.
After the verdict was read, the judge stripped Shumate of his badge and revoked his bond. Shumate will stay in the Potter County Detention Center until his punishment is decided. The court will convene again Tuesday morning for the punishment phase of the trial, where he could receive anything from probation to 99 years in prison.
Shumate surprised everyone by taking the stand in his own defense. He testified that he had not taken any bribes, and the charges came from the imagination of his "vindictive" ex-wife. In fact, during his summation Shumate's attorney called Shumate's ex-wife "the meanest woman in Amarillo", and said everyone was afraid of her, including Shumate.
It does seem a bit strange that the defense team agreed to an all-female jury, and then went with the "vindictive ex-wife defense". But smart defense or not, Shumate is now a convicted felon.
Posted by Ted McLaughlin at 7:09 AM