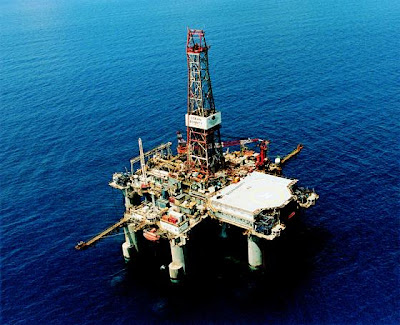 After the mess the Bush administration has made of our economy, it seems like Bush thinks he can still lie to the American people and get away with it. The price of gas is now spiraling out of control. It's already over $4.00 a gallon, and it looks like it might rise to $6.00 or $7.00 a gallon before much can be done about it. But Bush (and his elderly protege, Sidney McCain) claim they have a simple solution.
Bush and McCain say all we have to do to lower the price of gasoline is let the big oil companies drill for oil in our pristine wilderness areas (ANWR) and offshore of some of our most beautiful and popular beach areas. They would have us believe that as soon as the drilling starts, the price of gasoline will magically begin to fall. What a load of crap!
The new proposed drilling would fatten the wallets of Bush and Cheney's corporate oil buddies, but it would do nothing to bring down the price of gasoline. As McBlogger tells us, it would take nearly 10 years for that new oil to get to market. In addition, there's simply not enough of it there to make much of a dent in the oil market.
There are a few other things to consider before buying into the silly argument that we can drill our way out of this mess. First, one of the most successful of all oilmen, T. Boone Pickens, says it can't be done. He says there's simply not enough oil there to drill our way to energy independence.
Second, the chances are much greater of ruining our wilderness and beaches than of finding enough oil in those areas to affect the price of gasoline.
Third, there are already 68 million acres of land and water where oil companies currently hold leases, but have not drilled. Shouldn't these areas be tapped first?
Fourth, a significant portion of the oil that is produced in this country is being shipped to foreign countries. What guarantee do we have that the oil companies won't do the same with any new oil found in America? The big oil companies are multi-nationals. They're not trying to make us energy-independent. They're only interested in record profits.
The truth is that there's only one thing that will bring down the price of gasoline -- a significant drop in demand for it. As long as our only alternative to power our vehicles is gasoline (and those vehicles use that gas inefficiently), the price will continue to rise.
It is time for the United States to adopt a reasonable energy policy -- something that has been non-existent in the last eight years. Part of that policy should be to significantly lower the vehicular demand for gasoline.
We must raise the fuel efficiency of all gasoline powered vehicles and produce more hybrid vehicles. We should also run more of our vehicles on natural gas and biofuels (that are NOT made from food products such as corn). We should also hasten the development and production of electric and hydrogen vehicles.
If we were to stop playing around with these ideas and get serious about them, we could greatly reduce the demand for gasoline in just a few years. Then the prices would come down. The more that we don't need gasoline, the lower the price will be.
But the idea that we can drill our way to energy independence is just another Republican lie.
Posted by Ted McLaughlin at 12:03 AM