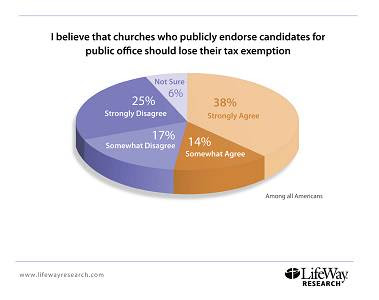 One of the most disturbing trends in politics in recent years has been the mixing of religion and politics -- especially the christian religion. It has even gotten so bad that some preachers and pastors have endorsed political candidates or positions from their pulpits, and inferred that anyone who disagreed with them is not a good christian.
The largest beneficiary of this mixing of politics and religion has been the Republican Party because many fundamentalists have been very vocal in their opposition to Democrats, and some states have seen the Republican Party virtually taken over by these religious "social conservatives". These people would like for the rest of us to believe that they represent a majority of Americans. But do they?
Not if you believe a 2008 poll by LifeWay Research. They polled 1,208 adults on their views regarding religion and politics. Their poll has a margin of error of 2.9%. This poll clearly shows that most people are not at all comfortable with churches becoming involved in politics. Look at the answers they gave to several revealing questions:
I believe it is appropriate for churches to publicly endorse candidates for office.
25% agree
75% disagree
I believe it is appropriate for churches to use their resources to campaign for candidates for public office.
15% agree
85% disagree
Churches that publicly endorse candidates should lose their tax-exempt status.
52% agree
42% disagree
6% don't know
Churches that publicly endorse candidates should lose their tax-exempt status (by region).
South - 41% agree
Central - 56% agree
West - 56% agree
East - 58% agree
I believe it is appropriate for pastors to publicly endorse candidates for public office, but only outside of their church role.
54% agree
44% disagree
I believe it is appropriate for pastors to publicly support candidates for public office during a church service.
12% agree
87% disagree
Those are some pretty significant numbers, and could easily be one of the reasons the Republicans did so poorly in the 2008 elections. Maybe Republicans should reconsider the strong ties they have made to the fundamentalists because the huge majority of Americans are not at all comfortable with this mixing of politics and religion.
One of the things that surprised me the most was that the group that most strongly opposed churches becoming involved in politics were those aged 55 or older (who are the most likely to vote in any election), because this group also has the highest percentage of religious people.
Although this poll was released in September of 2008, I doubt if these numbers have changed much in the last year and a half. Although it is not discussed very much in the public forum, most people are afraid of any one religion or sect becoming too politically powerful.
This worked in favor of Democrats in 2008, and could well do so again in 2010 (although the effect will likely be felt most strongly outside of the South).
Posted by Ted McLaughlin at 12:04 AM