The Four R's Of Teabaggerism 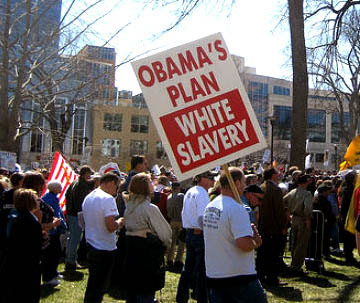 I have long believed the teabaggers are a dangerous group of people who are far more upset at America having an African-American president than the direction of the country. In fact, the direction they want to take this country is backwards -- to a time when race was a bigger problem and the corporations ruled to the detriment of all American citizens (except the super-rich).

Over at the blog of Jonathan Turley, guest blogger Mike Appleton has written a post on why he believes the teabaggers are dangerous. I think he is right on target, and since I can think of nothing to add to his excellent words, I print here his "Four R's of the Tea Party".

1. It is racist.  I know.  I just played the race card.  But the best way to stop someone from playing the race card is to quit dealing it.  Public expressions of bigotry began as soon as Barack Obama was nominated at the Democratic convention, and continued throughout the campaign, during which prominent Republicans referred to him as “boy,” “uppity” and other vulgarities.  In short order he became a socialist and a Marxist and was then transformed into an extremist Arab Muslim.  Sarah Palin eventually settled on the euphemistic “let’s take our country back,” but we all knew what she meant.  The Tea Party began forming before the inauguration and was printing “Don’t Tread on Me” posters while the Obama family was still unpacking in the White House.  On April 15, 2009, the Tea Party was protesting a tax burden that was, and is, the lowest in 60 years.


The Tea Party has promoted ugly forms of nativism, including punitive immigration laws,  English only legislation and bans on the teaching of ethnic studies.  It is the 1840s once again, but the targets are Muslims and Hispanics rather than Germans and Irish.


2.  It is a religionist movement.  I don’t know if religionism is a word, but I use it to describe a phenomenon distinct from traditional religion: religion as political philosophy.  It is the view that the Constitution was divinely inspired, that America is God’s gift to mankind, that capitalism is mandated by Holy Scripture and that the notion of “social justice” is the work of the Antichrist.  It is a culmination of the fundamentalist reaction in the early 1900s to Darwin and the progressive movement.  It has spawned a form of Christian imperialism that justifies the “crusades” in Iraq and Afghanistan, supports Israel uncritically and sends American politicians to Africa to lobby for the death penalty for homosexuals.


3.  It is repressive.  The Tea Party is committed to authoritarianism.  Lawmakers in Congress and throughout the country, particularly in states with heavily Republican legislatures, have been imposing humiliating burdens on women’s constitutional rights at breakneck speed.  They are simultaneously reducing taxes on business  and cutting funding for education and health care.  The regulation of entire industries is being eliminated in certain states.  The integrity of public employees has been impugned and their rights to organize curtailed.  Laws banning the phony threat of sharia are pending in a dozen states.  The independence of the judiciary has been threatened by proposals to reduce courts’ rule-making authority and politicize the judicial selection process.


4.  It is revisionist.  The Christian right and its supporters in legislatures and on school boards have demanded that high school history texts be rewritten to eliminate references to the deism endorsed by many of the Founders in favor of promoting the false notion of America as an exclusively Christian nation.  The history of slavery and the Civil War is being falsified to satisfy the desires of apologists for the Confederacy and southern “values.”   Science cannot be re-written, but it can be denied.  The sciences of climate change and evolutionary processes have become the subjects of unnecessary controversy.
Posted by Ted McLaughlin at 12:04 AM