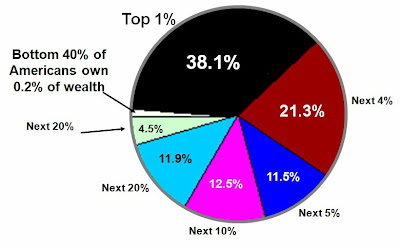 When the protesters started their Occupy Wall Street demonstrations over a month ago, it was first ignored by those in power. They figured the protesters would soon tire of the effort and go away. But they underestimated the tenacity of those protesters, and they also underestimated the anger among the general public over the recession and the economic system that had created it. Instead of dying out, the demonstrations grew stronger, and then they began to spread out of New York City and across the country.

First it was other large American cities, then it spread to smaller cities all over the country and eventually it even spread beyond the borders of this country. A couple of weekends ago there were "Occupy" demonstrations in over 1500 cities around the world. This makes sense because the economic inequality and injustice that is evident in America also exists in many other countries -- and the giant Wall Street Banks and international corporations  don't let puny things like national borders interfere with their greedy endeavors.

But the politicians and power brokers really perked up their ears when they learned that a large segment of the United States population was supporting the Occupy Wall Street protesters. One early poll showed that of the people who were familiar with the demonstrations, more than twice as many approved of them than disapproved. Then Time Magazine commissioned a poll (done on October 9th and 10th of 1,001 randomly chosen adults), and that poll showed that 54% of the public approved of the Occupy Wall Street demonstrations while only 23% disapproved (and another 23% said they didn't know enough to have an opinion).

Those are some pretty nice numbers -- numbers that the two political parties can only dream about these days. Obviously the protesters had struck a chord with a lot of angry and unhappy Americans. Why was this happening? Why had the people stopped believing the broken promises of both political parties? Well, some clues can be gleaned from the answers to some other questions the Time Poll asked. One of those questions was:

That means about four out of every five Americans believes the distribution of wealth and income in this country is not just unequal, but unfair. This kind of inequality has not been seen since just before the Great Depression (and it then resulted in a massive economic disaster -- just like today). As the chart pictured above shows:

Those are some pretty incredible numbers. How can it be that 40% of the people in this country (over 132 million people) don't even control 1% of the country's wealth (or even one-half of 1%)? Or that 60% of the population (over 198 million people) don't control even 5% of the nation's wealth? In what universe can that be considered fair and equitable? Another question the poll asked was:

This won't be remedied until the money is taken out of politics through the public funding of all federal elections and lobbying is outlawed. It won't be easy to do with the huge donations the politicians get through PACs and superPACs (and the high-paying lobbying jobs waiting for them when they retire), but it must be done. The Occupy Wall Street movement must continue to grow until the politicians are too afraid not to do it -- or a constitutional amendment must be passed. A third question asked in the poll was:

This should be no surprise. The greedy and illegal actions of these executives on Wall Street kicked off the recession and cost many millions of people their jobs. And what happened? They were rewarded with a $700 billion bail-out of taxpayer money. Then they went right back to doing what they had been doing before, including giving themselves millions of dollars in bonuses. Meanwhile, many millions of Americans are out of work and more people slip into poverty every month -- and the corporate-bought politicians want to slash the social programs that help them to keep their heads above water.

It's no wonder that the people support Occupy Wall Street. They are angry, and they have a right to be angry. But anger alone is not enough. That anger must be turned into action. We must make sure the movement continues to grow - and grows large enough that change must happen.
Posted by Ted McLaughlin at 12:06 AM