3 States To Vote On Marijuana Legalization 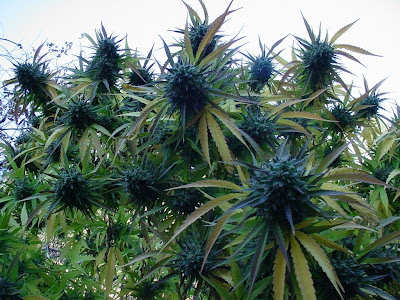 There has never been a legitimate reason for marijuana being illegal in the United States (or anywhere else). The first anti-marijuana laws were not an effort to prevent drug addiction (because addiction is not a problem with marijuana), but an effort to control people that the government at that time considered to be "undesirables" (mostly African-Americans and Hispanics). That's why marijuana became illegal (even though it is neither addictive nor dangerous), while far more dangerous drugs like alcohol and tobacco remained legal -- because they were the drugs of choice of the White power structure.

When marijuana became popular with White kids during the counter-culture years of the late sixties and early seventies, there was an added impetus to crack down on marijuana -- as a way to fight back against the anti-government ideas of youth. It was far easier to bust a young person for using marijuana than for having the temerity to think for themselves or disagree with government policy. Since that era, the marijuana laws have been maintained through a disingenuous government campaign of lies -- lies that protected the lucrative anti-marijuana industries of government (drug war), police agencies (money & property seizures), prisons (large influx of new victims), rehab clinics (treating a non-existent addiction), and various other interest groups (receiving both government money and voluntary donations).

The government's fight against the gentle herb known as marijuana has been disguised as a fight against the horrors of "drug addiction", but it isn't. It is another shameful chapter of prohibition in this country's history, instituted and continued by self-righteous people who think they have the right to determine what is best for everyone else. The truth is that marijuana is NOT a dangerous drug, and its recreational use does no harm to its users or anyone else. Keeping it illegal just pumps huge amounts of money into mafia-like cartels, robs government at all levels of an enormous amount of tax revenue, makes criminals out of decent hard-working non-violent citizens, and denies many other people of the ability to make an honest living in the growth, transportaion, distribution, and sales of marijuana products.

Fortunately, millions of people in this country are beginning to see through the government propaganda, and realize that it simply makes no sense to continue marijuana's illegality. It started with many states declaring marijuana to be legal for medicinal use. This made sense and many sick people were helped. Now there is a movement to go further -- to legalize the recreational use of marijuana.

It now looks like the state of Oregon will have an initiative on its November ballot that would legalize marijuana for recreational use by those over 21. Advocates of the measure needed to get 87,000 signatures to get it on the ballot, and they turned in over 165,000 signatures. The signatures still need to be verified, but it is extremely unlikely that enough would be thrown out to keep the matter off the ballot. Here's how CNBC described the initiative:

If passed by voters in November, the Oregon Cannabis Tax Act would allow marijuana sales in the state to people over age 21, and would create jobs in the hemp industry by allowing it for clothing, food and other uses . . .

The Oregon initiative, if passed, would create a Cannabis Commission that could limit the amount of marijuana a person could purchase and would oversee cultivation and retail sales at special marijuana stores. Net proceeds from sale of marijuana would go to the state general fund.

Under the proposal, marijuana possession would be decriminalized although public pot consumption would be prohibited and subject to a fine of $250. The initiative, if passed, would take effect on January 1.


And Oregon is not the only state that will vote on whether to legalize marijuana this November. Similar ballot initiatives have already been approved in the states of Colorado and Washington. Even if these three efforts succeed this Fall, there is a long way to go. But just maybe the citizens of the United States are starting to see the light. I certainly hope so.
Posted by Ted McLaughlin at 12:06 AM