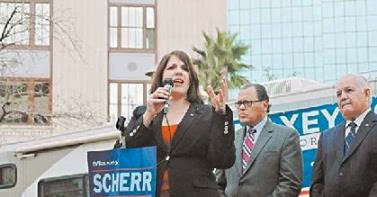 I was personally hoping that the Democrats in Texas could get a candidate with good name recognition and a high approval rating to run for the U.S. Senate -- much like the candidates for governor and lt. governor they are fielding (Wendy Davis and Leticia Van de Putte). But that was not to be. Although five candidates have placed their names in contention for the Democratic senate nomination, most Texas Democrats haven't heard of any of them.

That does not mean none of them would make a good candidate though. There is a young attorney out of El Paso (Maxey Scherr) who is a good progressive, and is already hitting the campaign stump. She's running on a platform of raising the minimum wage, protecting women's rights, and assuring equal rights for the LGBT community. I like what I've seen of Ms. Scherr (pictured above), and she's likely the candidate I will be supporting. I think she will make a good candidate -- provided she can get the funds to introduce herself properly to the voters of this state by next November.

There are three other Democrats running against Ms. Scherr -- a complete unknown, and two blue dogs. I'm not real familiar with any of them, but here is how Politicususa.com describes them:

Hyetae “Harry” Kim is an Odessa-based physician. He may or may not have strong positions on issues important to Democrats, but to date he has no website and an online search finds no reference to his positions on major political issues. Until Kim takes a public position on issues and until he shows that he is actively and aggressively campaigning to win, his candidacy merits little consideration as posing any realistic chance of winning a US Senate seat in the state of Texas.

Michael Fjetland, is an ex-Republican who left the party because it became too extreme. He is president of Armor Glass International and he ran against Tom DeLay in four consecutive elections from 2000 to 2006 (three times in the Republican primary and once as an Independent). Fjetland has reasonable positions on the issues. He supports a minimum wage increase, comprehensive immigration reform and ending discrimination against the LGBT community. However, he ran for congress four consecutive cycles without garnering much support, so his candidacy does not seem to have the gravitas needed to win an expensive and highly competitive US Senate race.

David Alameel, a multimillionaire dentist, argues that he has the money to compete with John Cornyn. Alameel is reportedly worth over 50 million dollars, and he is certainly capable of self-funding his campaign. However, he is part of the problem in Texas, given that he plans to run as a “conservative Democrat” and that he has heavily contributed to Republican candidates in the past, including ironically, John Cornyn. Alameel donated thousands to Cornyn’s Senate campaign and his political action committee in 2004 and 2005. He has also contributed heavily to Governor Rick Perry, Lt. Governor David Dewhurst and Greg Abbott. In fairness he has also donated a great deal of money to Democrats, but playing both sides to curry favor should hardly be a selling point in a Democratic primary. In addition, although Alameel boasts about how much money he can spend to compete, voters should remember that in 2012 he spent 4.5 million dollars (the most of any Congressional candidate in Texas) to finish a distant fourth place in a Democratic Congressional primary. Apparently he has the money to compete but not the message to win.

And then there's the fifth person on the primary ballot -- the nutcase (Kesha Rogers). I call her that because she's not really a Democrat, and doesn't support anything resembling the ideals and beliefs of the Democratic Party. She's a Lyndon LaRouche supporter -- who wants President Obama to be impeached, believes the Queen of England is the head of a world-wide drug cartel & is trying to bankrupt the United States, and thinks those who believe in global warming are just promoting an "imperialist genocide". I urge all Texas Democrats to NOT vote for this person.

Texas Democrats are not a homogeneous group, and I often find myself disagreeing with some of them (since they cover the political spectrum from left to right). Vote for the candidate of your liking. If you want to vote for an unknown West Texas doctor, do so -- and if you are a more conservative Democrat, you have a couple of blue dogs to choose from. And if you are a progressive like me, then Scherr is the obvious choice. But no true Texas Democrat should even consider supporting or voting for Kesha Rogers. We need a serious candidate heading our ticket in November 2014 -- not a nutcase.
Posted by Ted McLaughlin at 12:02 AM