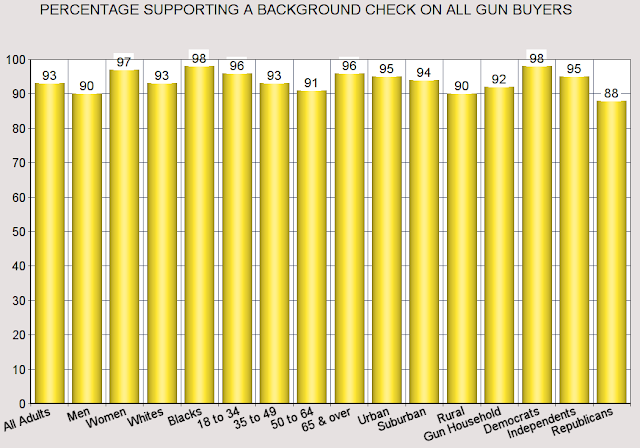 This chart was made from information in the new Quinnipiac University Poll -- done between October 29th and November 2nd of a random national sample of 1,144 registered voters, and has a margin of error of 2.9 points.

This poll shows that surveys need to be specific about the questions they ask. When asked if the U.S. needed to pass stricter gun laws, only 52% said "yes" and 45% said "no". That's because the phrase "stricter gun laws" could mean anything -- from registering guns to confiscating them. But at least one stricter gun law is supported by an overwhelming number of Americans.

When the survey got very specific and asked respondents if All gun buyers should have to go through a background check before purchasing a firearm, a whopping 93% said yes. And this opinion holds through all demographic groups -- even 92% of those with a gun in their household and 88% of Republicans (the two groups some might think would oppose the law).

There is absolutely no legitimate reason to delay any further on closing the loopholes in the current background check law. Americans are tired of terrorists, criminals, and other dangerous people being able to legally purchase any kind of gun they want. They know that doing this would not violate the Second Amendment, and would not keep any law-abiding citizens from buying a gun. It's just a sensible measure that would save thousands of lives each year.

It's time to put pressure on Congress. They must know the people want these loopholes closed. They must be made to realize they were elected to do the will of the people -- and not to increase sales by gun manufacturers.
Posted by Ted McLaughlin at 12:02 AM