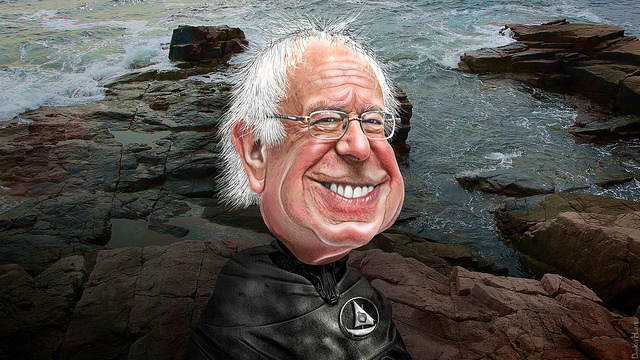 Bernie Sanders has told us that he will win, both the presidency and the general election, with a massive political revolution -- a revolution that will bring huge numbers of new people into the political process. And these people will turn out in such large numbers that they will not only win him the presidency, but will cause Republicans to have a "come to Jesus" moment and support his leftist programs.

So, where is this massive political revolution. It certainly hasn't shown itself yet. If it was really happening, shouldn't massive numbers of people be turning out for Democratic caucuses and primaries? That is just not happening. In Iowa, New Hampshire, and Nevada, the turnout of those participating in the process for Democrats was substantially down from the numbers in 2008 -- and there is no reason to think the same won't be true of South Carolina next Saturday.

Bernie does seem to have won over Millennial voters, and is doing well among Gen X and Boomer progressives -- but those don't even make up a majority of the Democratic Party, and certainly won't make up a majority of general election voters (although many Hillary Clinton supporters will grudgingly support him if he wins the nomination).

Progressives seem to believe that Americans want change, and if they just explain Bernie's radical left agenda properly, then voters will flock to his cause. As a progressive myself, I wish that was true -- but it's not.  The United States is a moderate country. While Americans do want change, most want that change to be a well-thought-out and moderate change. They don't want the apple cart upset by radical ideas from either the left or the right. And even if Bernie was somehow able to win the Democratic nomination, we should not forget that the election for president will be decided by Independents (most of whom are moderates (since there are not enough Democrats or Republicans to win on their own).

Finally, let us assume that this massive political revolution does finally show up, and not only gives Bernie the nomination, but elects him president by an overwhelming vote. That would make no difference at all to a Republican-dominated House of Representatives. Most of those GOP representatives sit in safe gerrymandered districts -- districts that would punish them for accepting even a tiny bit of Bernie's programs. They would still be just as obstructionist as ever.

As I said, Bernie has won over many Millennials and progressives, but their numbers are not nearly enough to be called a massive political revolution. They do make up a significant portion of the Democratic Party, and that will allow him to run a good race for the nomination. But a truly massive political revolution will require many more people -- and so far, that has just not happened. And I don't think it will.
Posted by Ted McLaughlin at 12:06 AM