Millions Of Guns Sold Last Year W/O A Background Check 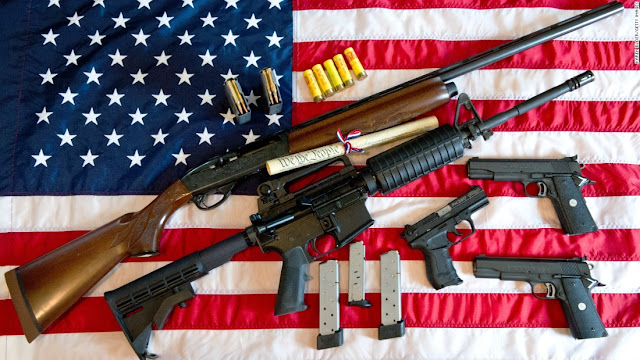 (The image above is from CNN.com.)

It has been estimated that 40% of the guns sold each year in the United States was sold without a background check. That figure may be a little high. Politifact looked at it, and discovered that the percentage comes from a study done in 1994 -- a study that included guns given as gifts or gotten through an inheritance.

A January 2017 study in the Annals of Internal Medicine, which excluded gifts or inherited guns, put the figure at about 22%. That's still an enormous amount of guns sold without a background check.

That should scare the hell out of everyone. How many of those more than 6 million guns were purchased LEGALLY by criminals or terrorists?

I am not one of those who want to outlaw guns. I understand that the Second Amendment of the U.S. Constitution guarantees the right of Americans to buy and possess a firearm. But that does not extend to criminals and/or terrorists -- and restricting their right to buy or own a firearm is not a violation of the Second Amendment according to our Supreme Court.

I have no problem with law-abiding citizens buying or owning a gun. But I do have a problem with criminals and terrorists being able to legally buy a gun. And so does the vast majority of Americans. Poll after poll has shown that 85-90% of the public wants a background check done on ALL gun sales (and that includes a substantial majority of NRA members).

So, why won't Congress plug the holes in our background check law? The only answer is that too many members of Congress have been bought (by the NRA leadership and gun manufacturers). That's a sad commentary on our political system, but it is true.

We must put more pressure on Congress to respond to the wishes of the people -- and plug the holes in the background check law. It is sheer insanity to allow over 6 million guns a year to be sold without a background check.