What Should Puerto Rico Be (State, Nation, Territory) ? 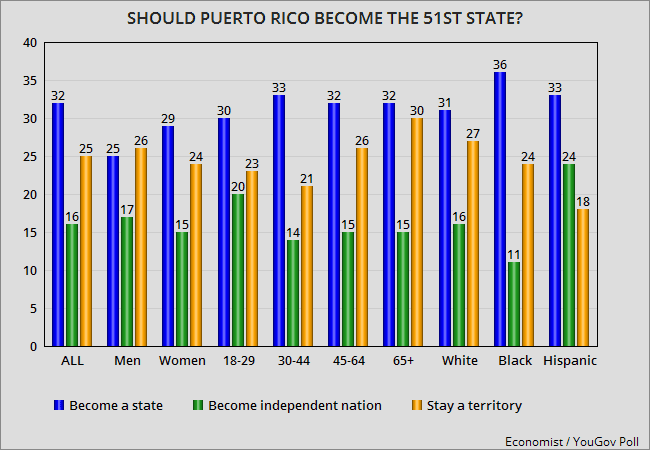 Puerto Rico has had two plebiscites since 2012, and both times the majority voted for statehood. But both of those plebiscites were questioned by opponents, who claimed they weren't fairly done. I think most Puerto Ricans would like to see statehood, but with the Republicans in charge of Congress, that is unlikely (since the Republicans believe that would increase Democratic Party numbers in both houses of Congress and in the Electoral College).

There also doesn't seem to be a lot of support among the citizens of the U.S. for Puerto Rican statehood. The chart above reflects information about the issue in the latest Economist / YouGov Poll -- done between July 15th and 18th of a random national sample of 1,500 adults (including 1,273 registered voters), with a 3 point margin of error.

As you can see, the opinions of what should happen with Puerto Rico are split -- and no opinion has majority support from any demographic group. About a third of Americans (32%) would like to see Puerto Rico become the 51st state, while 25% wants them to remain a U.S. territory, and 16% say they should become an independent nation. The remaining 27% don't know what to think.

It's results like this that keeps the status quo in place. Congress is not about to consider statehood for Puerto Rico until a majority of the public wants that to happen.

That's kind of sad, because it leave the people of that beautiful island in limbo. They are U.S. citizens, but they cannot vote in the presidential elections and they have no voting representation in Congress (only a symbolic representation).
Posted by Ted McLaughlin at 12:08 AM