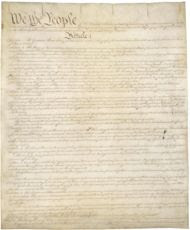 Supporters of the Constitution have been saying the Patriot Act was unconstitutional for years. Finally, a federal judge agrees. On Wednesday, U.S. District Judge Ann Aiken threw out two provisions of the Patriot Act, ruling they allowed search warrants to be issued without probable cause.

Judge Aiken said Patriot Act amendments to the Foreign Intelligence Surveillance Act "now permits the executive branch of government to conduct surveillance and searches of American citizens without satisfying the probable cause requirements of the Fourth Amendment."
She went on to say, "For over 200 years, this Nation has adhered to the rule of law -- with unparalleled success. A shift to a Nation based on extra-constitutional authority is prohibited, as well as ill-advised."

Thank goodness for this ruling, and this judge. The Fourth Amendment, as well as the rest of our Constitution, has served this country well since its inception. It makes no sense to destroy the constitution because of a terrorist act. Our Constitution is the only thing that guarantees our freedom.

The greatness of this country lies in the fact that its citizens have rights that even the government cannot trod upon. George Bush tried to destroy those rights by frightening the people. If he is allowed to succeed, then we are just a tiny step away from a true police state.
With her ruling, this judge has helped our country to step back from that awful precipice. Now we must wait and hope the higher courts will also have the courage and wisdom to uphold our Constitution.

Government must have limits if freedom is to exist.
Posted by Ted McLaughlin at 12:03 AM