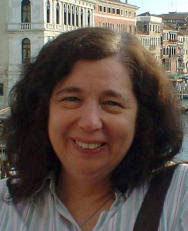 There are those in many religions who, in their zeal, just take things too far. They abandon common sense and common decency, and make their beliefs more important than the people their religion is supposed to help. That seems to be happening in Sudan right now.
Last Sunday, the Sudanese government arrested Gillian Gibbons (pictured above) -- a British citizen who is a second-grade teacher in a private school there. Yesterday, they charged her with inciting religious hatred. The charge could result in 40 lashes and a prison sentence.
Just what terrible thing did she do to deserve such a serious charge? She allowed her class to pick a name for the stuffed teddy bear she had as the class "mascot". The class chose to name the toy bear Mohammed -- a common name for men in the country.
Neither the teacher nor the students meant any disrespect, but that's not how some parents saw it. They thought naming the bear Mohammed was disrecpectful to the prophet of Islam. They took the matter to government officials. The officials agreed and arrested the teacher.
They could have just asked her to rename the bear, and I'm sure she would have. She was not trying to cause any trouble. But these people were so wrapped up in their fundamentalist beliefs that they lost their sense of reason and decency.
The government tried to defend its action by saying they would have done the same if the bear had been named Jesus or Moses. This just shows they don't understand the wrongness of their actions. This was a gross over-reaction no matter who the prophet was or what the religion was.
The British government is trying to negotiate on behalf of the teacher, and I hope they are successful. She has done nothing wrong and should be released.
But this is not a muslim problem. It is a problem of fundamentalism taken too far, and it happens in many religions, including christianity.
The purpose of religion is to help people -- not to punish them for imaginary crimes.
Posted by Ted McLaughlin at 12:01 AM