U.S. A Haven For War Criminals ? 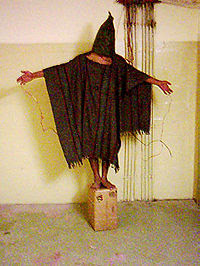 "More than 1,000 people from 85 countries who are accused of such crimes as rape, killings, torture and genocide are living in the United States, according to Department of Homeland Security figures." (Renee Schoof, McClatchy Newspapers)
Those are some pretty shocking numbers, especially coming from the Bush administration. Senator Richard Durbin (D-Illinois) believes the United States is becoming a haven for the world's war criminals because we don't have the appropriate laws to punish them.
Durbin says, "This is unacceptable. Our laws must change and our determination to end this shameful situation must become a priority." Durbin and Senator Tom Coburn (R-Oklahoma) have introduced a bill to allow the United States to prosecute those guilty of genocide, human trafficking and recruiting of children as soldiers.
Oddly enough, torture is already prosecutable in this country, even though our own president and vice-president are themselves guilty of authorizing its use.
I do support Durbin's efforts. It is horrifying that our country has become a hiding place for the world's war criminals. It is an embarrassment for all Americans that these criminals feel they are safe from being prosecuted here.
But I have to wonder if we still have the moral authority to do otherwise. What would the world think if we prosecuted these criminals, considering the crimes that the Bush administration has committed (starting an illegal war, torture, holding prisoners indefinitely without charges, denial of habeas corpus, etc.)?
It just doesn't feel right for one set of war criminals to be prosecuting another set of war criminals.
Posted by Ted McLaughlin at 12:01 AM