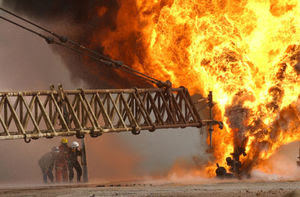 Bush would like for us to believe that he invaded Iraq to bring democracy to the people of Iraq. Especially since his first excuse has been proven to be a lie -- that Iraq was connected to the 9/11 tragedy. But recent events show the second excuse is also a lie.
There was only one reason for the invasion and occupation of Iraq -- OIL! The International Energy Agency says the production of oil in Iraq is now exceeding pre-war levels. Before the United States invaded the country, Iraq was producing less than 2 million barrels a day. Iraq is now producing 2.3 million barrels a day.
How is this happening? The IEA says it is happening because of improved security of oil production facilities and pipelines. At the beginning of this year, production was only 1.9 million barrels a day.
Deaths of American soldiers has fallen largely due to the decision of Sadr's Shiite militia to stop attacking the American military, so just what has the surge accomplished? Obviously it was not done to protect the Iraqi civilians -- they are still dying in large numbers. Just a few days ago, car bombs killed 39 and wounded about 100.
But oil production is up. Now the true reason for the surge is readily apparent. Obviously it is more important to Bush to protect the oil rather than the civilian population. Bush won't end this madness because his corporate friends are making too much money off the oil and the no-bid contracts.
American and Iraqi lives are a secondary concern at best.
Posted by Ted McLaughlin at 12:03 AM