Success In Iraq Is Just An Illusion 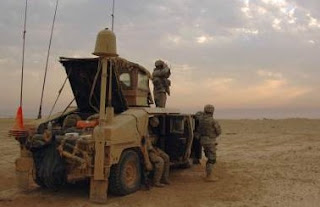 The Bush administration is trying to convince Americans that they are finally turning the corner in Iraq. They want to convince us they are winning this war before it takes a serious toll on Republicans in the coming election.
U.S. Embassy spokesman Phil Reeker told the media, "It is pretty clear that 2007 comes to an end in Iraq with Iraq as a substantially better place than where we began the year." Administration spokemen are now predicting that Iraq will be a less violent place next year.
That sounds pretty good -- until you look at the casualty figures. These figures show that there have now been 3900 American soldiers killed in Iraq. Another 19 Americans were killed in December. This is in addition to 1 British soldier and 460 Iraqis.
It is hard to see Iraq as a success, when at least 120 people are being killed there every single week. But the oil production figures are up. I guess if you consider oil production more important than human life, you could claim we are successful over there.
The Bush administration says that one reason for this "success" is the arming of 70,000 Sunnis to fight al-Queda (never mind that al-Queda has never been the primary enemy in Iraq). Most killings in Iraq are not done by al-Queda, but by Iraqis -- both Sunni and Shiite.
The arming of these civilian Sunni groups has done nothing but set up future violence in Iraq. The current puppet government (mostly Shiite) has already said they will seek to disarm these Sunni groups, although they have said nothing about disarming any Shiite groups.
Anyone who believes the Sunnis will peacefully disarm is living in a dream world. They are not about to leave themselves defenseless against the Shiite militias. All we are doing is arming both sides in the Iraqi civil war. It seems like Bush wants the violence to continue.
As long as the violence continues, Bush believes he has the excuse to keep our troops there. And as long as our troops are there, we can force the Iraqis to sell their oil to American corporations.
But this oil comes at a high price -- the deaths of hundreds of people each week, both Iraqi and American. Isn't it time we stopped arming their civil war and brought our troops home?
The killing will not stop as long as we occupy their country.
Posted by Ted McLaughlin at 12:04 AM