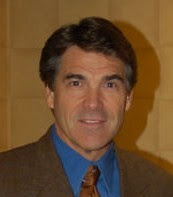 Last Friday afternoon, I flew back to the Panhandle from Austin. On the Austin to Dallas leg of the flight, I had the privilege (or misfortune, depending on how you look at it) of flying with a celebrity (of sorts).
The dignitary sharing my flight was old "37 per cent". That's right -- the inept and unpopular Governor of Texas was actually taking a commercial flight. Of course he was allowed to board from the tarmac, even before those normal pre-boarders.
When the rest of us were allowed to board, he and his aides/bodyguards had already filled the first two or three rows. The stone-faces on these men let us know quickly that the governor wasn't interested in shaking hands or talking to us plebians, although my female seat-mate said Governor Goodhair did wink at her as she passed.
Amazingly, the flight was late in taking off. It seems that Southwest Airlines can't be on time even when the governor is on board.
Of course, when we arrived in Dallas, Perry was hustled off the plane and into waiting vehicles before anyone else could get off. He was long gone by the time I de-.planed.
A few months ago, I had the real honor of flying from San Antonio to Dallas with an even bigger celebrity. It was the legendary Dallas Cowboys running back, Tony Dorsett. He was a lot nicer and much more accessible.
What about you? What celebrity have you traveled with? Was he/she nice?
Posted by Ted McLaughlin at 12:02 AM