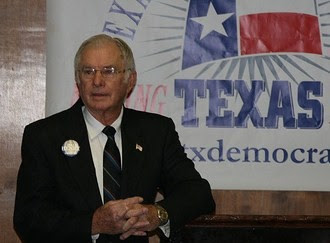 If you had any doubt as to why the current Republicans running the Texas Railroad Commission (TRC) need to be replaced, all you need to do is look at how they handled the case of Atmos Energy. Their handling of Atmos Energy shows just how corporate-friendly the TRC really is.
Several cities had asked the TRC to not allow Atmos to pass on some outrageous company expenses to their ratepayers. Atmos was trying to pass on expenses like $900 hotel rooms, $100 meals, $0.85 a mile car expenses and millions of dollars in legal fees. Company officials didn't mind living high off-the-hog, because their ratepayers (you and I) were the ones footing the bill.
It was hoped that the TRC would refuse to let Atmos pass these outrageous expenses to their customers. But we should have known better. Last week the Republican-controlled TRC gave Atmos what it wanted and approved the expenses.
TRC Chairman Michael Williams said the expenses "could raise concern" and an argument could be made for denying them. But he said it would only cost the ratepayers even more when the company took the matter to court.
Can you believe that? He's trying to claim he's saving the ratepayers money by letting the company pass on these exorbitant expenses to them. That shows just how much they're in the pockets of the corporate interests. He'll probably now claim to have cut our food expenses since we'll have less money to spend that way.
The Republicans have sold out to the corporate interests. The only way to get any fairness back in the system is to replace these Republicans with honest Democrats. We can begin to do that in the coming election.
We have an excellent candidate running for a position on the Texas Railroad Commission -- Dale Henry. Dale Henry (pictured above) will put the interests of the citizens of Texas first. I urge all Democrats to take the first step in solving this problem by voting for Dale Henry in the Democratic primary on March 4th.
Posted by Ted McLaughlin at 12:01 AM