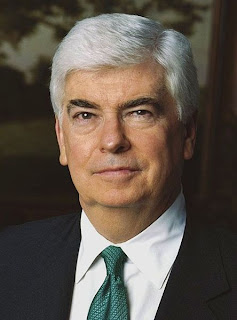 Things just keep getting better for Barack Obama. It looks like he has closed the gap in Texas and is on the verge of doing that in Ohio. Yesterday, he got another good piece of news. His former opponent in the presidential primary race, Senator Christopher Dodd, has formally endorsed Obama.
Dodd says Obama is "ready to become president and I am ready to support him in this campaign....(Obama) has been poked and prodded, analyzed and criticized, called too green, too trusting and for all that has already won....It's now the hour to come together....This is the moment for Democrats and independents and others to come together, to get behind this candidacy."
Obama has to be thrilled with this endorsement. Don't let the fact that Democrats didn't choose Dodd to be president fool you into thinking they don't like him. Senator Dodd is among the most respected people in the Democratic party, and this endorsement can do nothing but help Obama's candidacy.
Posted by Ted McLaughlin at 12:03 AM