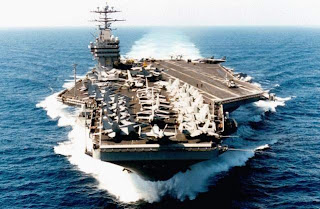 So far, Bush has failed in everything he's tried to do as president. He's started two wars, and over five years later hasn't won either of them. He promised to bring Osama bin Laden to justice, but can't seem to find him. He turned FEMA into a joke that had no clue how to handle the Katrina disaster in New Orleans. He's spent more money and created bigger deficits than any president in our history, and has virtually wrecked our economy.
Currently, he has the lowest popularity rating that any president has ever had. In spite of all that, he still has a grand vision of making his mark on history. He only has a few months left as president and wants to change the public perception of his failure as a president.
That's why it worries me that he's sending a second aircraft carrier to the Persian Gulf. He's been ratcheting up the talk about and accusations against Iran in the last few weeks. Now he's sending more American military power to the region. Is he planning to use it against Iran?
Secretary Gates says it's not an escalation -- just a reminder to Iran. But this administration has lied to us so many times that we'd be fools to believe anything they say now. Remember, this is the same fool who thought we'd achieve easy victories in Iraq and Afghanistan.
Frankly, the man scares me. It would be just like him to think he could strike Iran militarily without reprecussions. Didn't he just fire the Admiral who counseled against attacking Iran?
Bush has plenty of time to make another colossal blunder, and attacking Iran could be it. January just can't come fast enough for me.
Posted by Ted McLaughlin at 12:05 AM