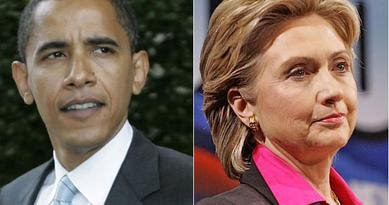 Clinton wants to debate Obama -- again. This time, she has thrown down a challenge to do a "Lincoln-Douglas" style debate. I can understand why she keeps wanting to debate.
She knows that she doesn't have a chance to win unless Obama makes a serious blunder, so she's trying to create as many opportunities for that to happen as possible.But to me, that sounds like a pretty cheap excuse to have a debate.
A debate should help the voters to understand where the candidates stand on the issues. I have to ask, is there anymore to be learned about the stance of the candidates?
This has been the most debated primary I can remember by any political party. There have been something like 21 debates in the Democratic primary this season. If you don't know where the candidates stand on the issues by now, then you just haven't been paying attention (and I doubt you'd pay any more attention to a 22nd debate).
There have been so many debates that the legitimate ones have become just a rote repeating of stances we have heard many times before. In an effort to make the last debate more interesting, ABC let their questioners stray far from the real issues. The first 45 minutes of the debate covered such earth-shattering issues as flag-lapel pins.
After seeing the ABC debate travesty, the Democratic Party of North Carolina withdrew their support for a debate in their state. They realized that there have been so many debates that they have degenerated into nothing more than "gotcha" politics.
At this point, it would make no sense for Obama to accept another debate. He has already proven he is not afraid to debate Clinton -- after all, he has done it 21 times. Another debate would prove nothing.
Let's stop beating this dead horse. No more debates. PLEASE!
Posted by Ted McLaughlin at 12:01 AM