Pickings Are Slim For Recruiters 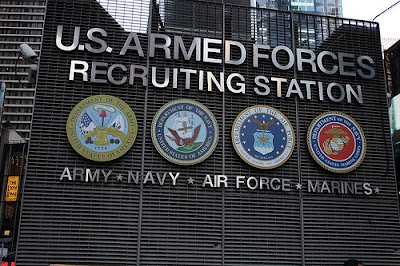 The United States Army needs to recruit about 80,000 new soldiers each year to keep the forces at the current level. The United States Marines need a few less. However, it looks like both are having trouble filling their quotas.
Both the Army and the Marines are now having to lower their standards. A few years ago, neither would have accepted anyone who had been convicted of a felony. But in 2007, the Army granted 511 felony waivers. That is more than twice the 249 it granted in 2006. Meanwhile, the Marines granted 208 in 2006 and 350 in 2007.
They have granted waivers for such felony crimes as assault, burglary, drug possession and making terroristic threats. However, the Army swears it doesn't grant waivers for crimes like sexual violence, alcoholism and drug trafficking.
What is really ridiculous is the reason the Army gives for lowering their standards to accept criminals. The Public Affairs Department said that only 3 out of 10 Americans of military age "meet all our stringent medical, moral, aptitude or administrative requirements."
Do they really expect us to believe that nonsense? The truth is that the huge majority of Americans, including those of military age, are opposed to the war in Iraq. Most of us don't see the sense in sending more young people to die in Iraq, when we know that nothing is being accomplished there except the enrichment of huge corporations.
Personally, I support and admire the young men and women who have served in Iraq. They are not the ones who blundered horribly -- that was our leadership in the White House. These brave men and women are just trying to make the best of a very bad situation they have been put in.
But I fully understand why most do not want to join them over there. Our current leadership is far too foolish and short-sighted, and have demonstrated an unholy willingness to sacrifice lives for corporate profits.
Posted by Ted McLaughlin at 12:04 AM