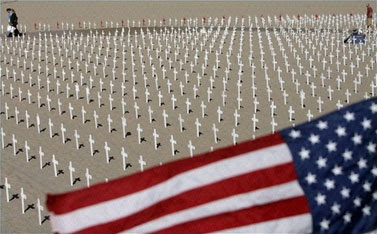 The last few days have not been good for John McCain. After casting his lot with an extended war in Iraq and staying until a final victory is achieved, it seems like everyone, even his friends have turned against him.
Obama has been saying for some time that he would withdraw all the troops from Iraq within a general timetable of 16 months. A few days ago, the Iraqi leader (Maliki) also began to press for a timetable for withdrawal. He even went further and said Obama's timetable sounded about right to him. Then George Bush succumbed to pressure from the Iraqis and agreed to "time horizons" -- he couldn't bring himself to call it a timetable.
The American public is further from McCain's position. Over 63% of Americans would like to see the troops withdrawn within a year. This left McCain out in the cold on the withdrawal situation. So for a few days he's just been repeating that the surge was his idea and it worked, and Obama should admit that. But is it the truth?
In the first 6 1/2 months of 2008, over 220 Americans and more than 4,000 Iraqis have been killed. That is a long way from victory, but it does reflect a cut in the number of deaths. McCain would have us believe the troop surge was responsible for the smaller number of deaths. Some of the media are buying his argument.
But the truth is that two other things happened in Iraq about the same time as the troop surge, and both of them probably had more to do with the drop in deaths than the troop surge did. First, many of the Sunni tribal chiefs stopped supporting al-Queda and began to fight them. Second, al-Sadr declared a truce and ordered his Shiite brigades to not attack American troops.
Without those two things happening, it is highly doubtful that the troop surge would have had any effect at all. Also, with the two things occuring, the drop in the number of deaths would have happened even without a troop surge.
I realize that McCain is grasping at straws to try and maintain his credibility regarding the Iraq war, but his argument that the troop surge worked just doesn't hold water.
Posted by Ted McLaughlin at 12:02 AM