Will Ft. Worth Regret It's Greed ? 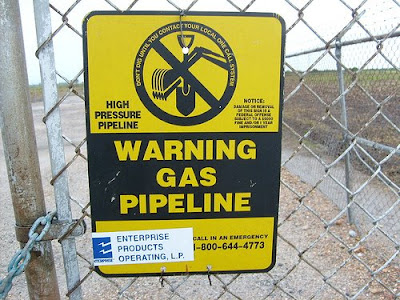 Back in April and May of this year, Fort Worth approved the drilling for natural gas within it's city limits. Both residents and government officials let their greed get the best of them, and opted for kick cash from the drilling companies. The right to drill for the gas was given both in residential areas and in the downtown area. Soon drilling rigs and pipelines will be all over the city.
The gas companies have made all sorts of promises to the city about clean drilling and safe pipelines, but the sad fact is that they're promises that probably can't be kept. There is no such thing as clean drilling or pipelines that will not leak (at least eventually).
Take for example, the land owned by Jay Marcom in Ranger, Texas. His land is criss-crossed by pipelines and a compressor station, and they're leaking. His surface dirt smells like oil and the ground water smells like gasoline. And both have been polluted with chemicals like benzene, xylene and toluene -- all are cancer-causing agents. In fact, the ground water is so polluted that if you put a match to it, it will burn.
Is this the legacy the gas companies are leaving Fort Worth? Things seem fine now as wallets are fattened and promises are made. But what about the future. Will future generations inherit a city where large portions of it are toxic sludge pits and poisoned soil and water?
Fort Worth is a wonderful city that has just recently revitalized it's downtown. I hope they're not now sowing the seeds of their own destruction.
Posted by Ted McLaughlin at 12:02 AM