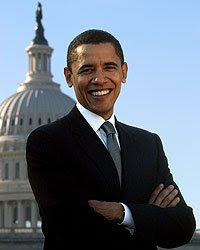 America took a giant step forward last night, when for the first time in our nation's history a major political party nominated an African-American as their candidate for president. Democrats officially chose Barack Obama as their candidate for the presidency in the November 2008 election. Here is how it happened.

The names of both Barack Obama and Hillary Clinton were entered in nomination before the convention and seconded. The Convention Secretary then called the roll of the states and the following votes were cast (Obama's votes are listed first and Clinton's second).

Alabama 48-5
Alaska 15-3
Am. Samoa 9-0
Arizona 40-27
Arkansas 47-0
California (passed)
Colorado 55-15
Connecticut 38-21
Delaware 23-0
Dems Abroad 8.5-2.5
Washington DC 33-7
Florida 136-51
Georgia 82-18
Guam 4-3
Hawaii 26-1
Idaho 20-3
Illinois (passed)
Indiana 75-6
Iowa 48-9
Kansas 34-6
Kentucky 36-24
Louisiana 43-7
Maine 24-8
Maryland 94-6
Massachusetts 65-52
Michigan 125-27
Minnesota 78-8
Mississippi 33-8
Missouri 82-6
Montana 18-7
Nebraska 28-3
Nevada 25-8
New Hampshire 30-0
New Jersey 127-0
Then it was New Mexico's turn, but instead of casting their vote they yielded to Illinois. Illinois then yielded to New York. Senator Hillary Clinton then took the microphone for New York, and in a magnanimous gesture of party unity she asked the convention to elect Obama by acclimation. A voice vote was taken and history was made.
I think a sizeable majority of Americans believe the Republicans have made a mess of our economy, mismanaged the "war on terror" and waged an unnecessary war in Iraq. Nearly 80% of Americans believe this country is on the wrong track and real change is needed.
In a few weeks, we will learn if America has made enough progress on the race issue. America knows Democratic leadership is needed. Will they vote for the Democrat Obama, or will they vote for McCain because he is white? I honestly don't know at this point. The polls are much closer than they should be considering how the country feels about Democrats versus Republicans.
Is America still too racist to vote for Obama? We'll find out in November.
Posted by Ted McLaughlin at 12:03 AM