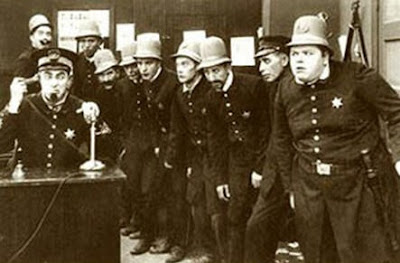 This criminal may quite possibly be the dumbest criminal ever. His crime was a fairly ordinary one. As a man emerged from a stall in the men's room, he stuck a gun in his face and demanded money. After receiving the money and a cell phone, he then tried to flee the building.

While the crime was not particularly bright, it was where the crime was committed that made it an incredibly dumb one. The victim was a retired police chief, and he was attending a police convention with 300 narcotics officers from Pennsylvania and Ohio. The chief and a group of police chased the man outside and apprehended him trying to get into a taxi.

Imagine robbing a police chief at a police convention and trying to get away in a taxi! A reporter asked the suspect for a comment after his arraignment, and he replied, "I'm smooth".

Smooth indeed!
Posted by Ted McLaughlin at 12:02 AM