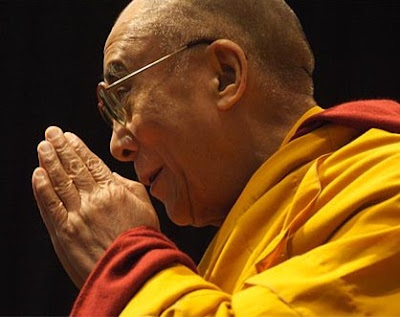 The Football World Cup playoffs will be held in South Africa in 2010 (or Soccer World Cup as we Americans know it). The South Africans are pretty proud to be hosting it, and rightfully so. The organizing committee in South Africa decided to hold a Peace Conference in conjunction with the World Cup, with the topic being "football's role in fighting racism and xenophobia."

They got the blessing of soccer's governing body, FIFA, and invited many Nobel Peace laureates and other well-known peace activists. They were going to not only celebrate the upcoming World Cup, but also show off South Africa's commitment to human rights. There was only one problem. The South African government couldn't live up to the high ideals of the organizing committee.

One of the high-profile invitees was Tibet's Dalai Lama (pictured above). Of course, this upset the Chinese government. Since their brutal invasion of Tibet, they don't like for the Dalai Lama to appear on the world stage and will stop him whenever they can. Beijing told the South African government the Dalai Lama's appearance "would harm bilateral relations."

So what did the South African government do? Sadly, they folded like a wet paper towel. They knuckled under faster than the Democratic Congress during the Bush administration. They refused to give the Dalai Lama the visa he needed to enter their country.

When they learned the Dalai Lama had been banned from entering South Africa, Archbishop Desmond Tutu and former South African president F.W. de Klerk both withdrew from participating in the Peace Conference.

The grandson of Nelson Mandela (and one of the conference organizers) said, "I am very saddened today to see that someone like the Dalai Lama, who all our laureates hold highly, has been turned down on their visa application. This rejection by the government... is really tainting our own effort of democracy. It's a sad day for South Africa, and it's a sad day for Africa."

The truth is that South Africa doesn't deserve the honor of hosting an international Peace Conference -- not if they are willing to knuckle under to China (or anyone else).
Posted by Ted McLaughlin at 12:02 AM