The Cat With Wings 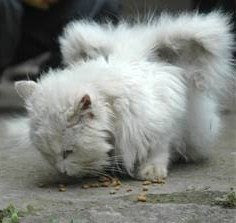 I've heard of a horse with a horn (unicorn) and a horse with wings (Pegasus), but those were mythical creatures that existed only in fables. In Chongqing (China), there is a cat with wings and it's very real.

The cat's family said he was very ordinary until he was about a year old. Then he started growing "wings" out of his back. As you can see in the picture above, they actually do look like furry wings. They don't hurt the cat, and the family said he enjoys all the attention he's been getting.

Scientists disagree about the cause of the cat's wings. Some say it's just a mutation. Others say it's mother drank something while pregnant that altered the cat's genes.

Whatever the cause, it's just downright weird.
Posted by Ted McLaughlin at 12:02 AM