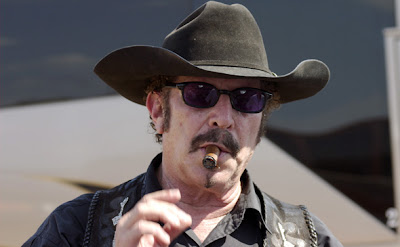 While the governor's race has already heated up and even gotten nasty for the Republicans (with Kay Bailey Hutchison and Rick Perry going at each other), the Democratic side has just been limping along with one candidate -- Tom Schieffer.   And frankly, he's not a candidate that excites any progressive Democrats.   He not only served in the Bush administration, but supported his candidacy in both 2000 and 2004.
I've met Mr. Schieffer, and while he's a nice enough guy, he leans far too much to the right for me.   I really can't see myself voting for him.   Thankfully, he's not the only official candidate anymore.
A few days ago, Hank Gilbert tossed his hat in the Democratic ring.   Four years ago, Gilbert ran on the statewide ticket as the Democratic candidate for Agriculture Commissioner.   I like Mr. Gilbert a lot.   He reminds me of the farmers I grew up around.   Men who valued honesty, hard work and a willingness to help a neighbor.   Gilbert also led the fight to stop the horrible Trans-Texas Corridor.
If Hank Gilbert wins the Democratic primary, I would have no problem voting for him and working to help him get elected.   But next Tuesday, we'll have a third official candidate for the Democratic primary.
According to his campaign manager, Rania Batrice, Kinky Friedman will officially announce his candidacy next Tuesday.   This is the candidate I have been waiting for.   I supported him in 2006, and I've already sent him two checks for his campaign this year.   I will definitely be supporting Kinky Friedman in the upcoming Democratic primary.
This should be a very interesting race on the Democratic side.   Each of the three candidates appeals to a different natural constituency -- Schieffer to the conservatives, Gilbert to party progressives and Friedman to mavericks like me who are tired of politics as usual.
But while I expect this to be a very hard-fought campaign between the three Democratic contenders, I seriously doubt it will degenerate into a gutter fight (like the Republican campaign already has).   I believe the personalities of the three candidates will keep the campaign on a higher level (although some of their supporters may get a little ridiculous).
Frankly, I'm looking forward to the campaign.   It should be a lot of fun!
Posted by Ted McLaughlin at 12:04 AM