Our Troops Are Fighting For This ? 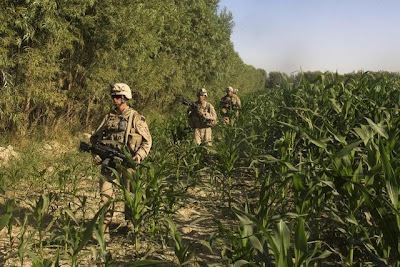 The Afghanis just had a national election last Thursday. They haven't finished counting the votes, so it is not known which cheater was the most effective. Yes, I said "cheater", because this was anything but a fair and free and democratic election.

Mirwais Yassini, deputy speaker of the lower house of parliament and one of over 30 people who ran for president, said he believes that both of the two main contenders are involved in widespread election fraud. He is talking about current president Hamid Karzai and his main opponent Abdullah Abdullah.

It looks like Mr. Yassini is right. The Afghanistan Free and Fair Election Foundation (AFFEF) has cited instances of "stuffed ballot boxes, illiterate voters being told who to vote for and biased officials." The AFFEF's "provisional report also details accounts of multiple voting, underage voting and election officials being ejected from polling stations by representatives of candidates."

The AFFEF sent 7,000 observers all around the country. The observers said "threats of violence against voters came from local powerbrokers, the Taliban and rival political camps."

Meanwhile, the observer mission from the European Union said "the election was well organised and was a victory for the Afghan people." With everything else that's been reported, I have to wonder just how far their heads were buried in the sand. Obviously, they were there to rubber-stamp the election -- not to see it was run properly.

Is this the wonderful democracy our American soldiers are dying for? We already knew of the anti-women laws they recently passed. Now it looks like there won't really be a legitimate winner in the election, and therefore won't be a legitimate leader for Afghanistan -- no matter how many votes are counted.

Frankly, none of the candidates running or leaders already in office is worth the life of a single American soldier. It is time to either declare victory or admit defeat (you choose) and get all of our soldiers out of Afghanistan.