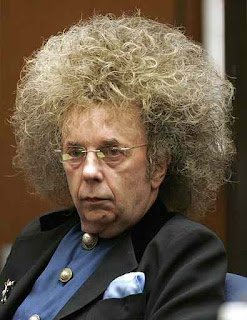 Here's a shocking bit of news. It seems that convicted murderer Phil Spector doesn't like prison. I have to wonder, did he think he was supposed to like it? Does he think all the other prisoners consider prison to be a vacation, and they're really having a good time?

Spector wrote to his friend Steve Escobar saying he wants his attorneys to get him to "a better prison with people more like myself in it during the appeal process instead of all these lowlife scumbags, gangsters and Manson types....They’d kill you here for a 39-cent bag of soup!”

Oh my! They've put a lowlife scumbag murderer in the same prison with other "lowlife scumbags". The horror! I think Spector needs to grow up and realize a couple of things.

1. He is a murderer. He belongs in a maximum security prison with other people who've committed similar crimes. If he can't do the time, he shouldn't have done the crime (which was to shoot an unarmed and defenseless woman in the face).

2. He's not supposed to like prison. He was sent there to be punished, just like the other "lowlife scumbags" in prison with him. If he liked it, it wouldn't be punishment.

This creep thought he was a badass when he threatened unarmed people with a gun for years on the outside. It doesn't surprise me that he's really just a pathetic wimp.
Posted by Ted McLaughlin at 12:02 AM