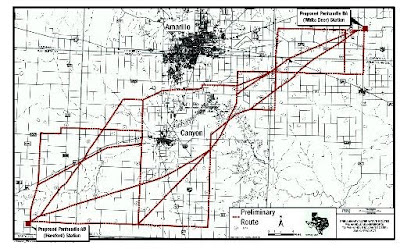 The large scale production of wind energy will be a real boon to Texas, and especially to the Panhandle region. But before wind energy can really take off, there must be a way to get that energy from where it is produced to where it is needed (and will be used). In other words, new energy transmission lines must be built.

Thank goodness that process is finally starting. Sharyland Utilities is holding public hearings on its proposed routes for transmission lines thru the Panhandle. The first section will be built from near Hereford to White Deer, and will run just south of Amarillo (see above map).

There are several routes available for this section of the transmission line, and these will be discussed in public hearings the next couple of days. The first will be held in Amarillo tonight from 5-8pm at the Region 16 Service Center (5800 Bell Street). The second will be held tomorrow in Panhandle (just east of Amarillo) from 5-8pm at the Carson County War Memorial Building (500 Main Street). Both meetings are open to the public.

Sharyland will be building about 300 miles of the transmission lines across 11 counties. It is good to see the process is finally getting started. Wind energy will not only provide a new source of income for many farmers and ranchers, but it will create many new jobs in this area. But this cannot happen on a large scale until the transmission lines are completed.

Here in the Panhandle, we are eager to begin providing Texas with clean and renewable energy.
Posted by Ted McLaughlin at 12:04 AM