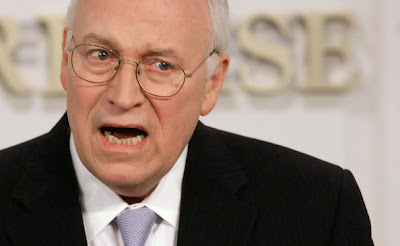 Unbelievably, there are still those who believe the Republican primary race for governor is between a far right-winger (Rick Perry) and a moderately right-winger (Kay Bailey Hutchison). This is just not true. Hutchison is about as moderate as a "teabagger" on methamphetamines.
Both of these candidates are on a dead run to the right to convince the racist right-wing base of the Texas Republican Party that they are truly the nuttiest right-winger of all. For a while, it looked like Rick Perry might be winning that race. After all, he had captured the endorsement of Sarah Palin -- the accepted queen of the unthinking right-wing nutjobs.
But Hutchison is not about to let him win that race without a down-and-dirty fight. She has trumped his Palin endorsement with an even scarier endorsement of her own. She has trumped stupidity with downright evil. Her endorsement is from the king of the neocons and the emperor of all that is wrong with America -- Dick Cheney.
Yesterday, the Hutchison campaign announced that the evil overlord Cheney will appear at a Hutchison fundraiser on November 17th in Houston, and announce that he is supporting Hutchison in her run for governor of Texas.
This should end once-and-for-all the fairy tale that there is any kind of moderate Republican running for the Texas governorship in the 2010 election.
Posted by Ted McLaughlin at 12:02 AM