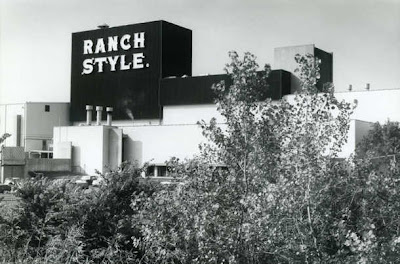 For me, this is terrible news. I have eaten Ranch Style Beans since I was a child -- both as a vegetable side with a meal or by themselves as a meal. In fact, I have been known to eat them cold out of the can. Suffice it to say, I absolutely love Ranch Style Beans!
I also took pride in knowing they were made and canned in that bastion of western culture -- Fort Worth. They have been made since 1932 in the same plant (pictured above) just off Hwy 287 on the east side of Fort Worth -- not too far from downtown. Ranch Style Beans are a part of Fort Worth's history.
And I'm not alone in my love for the chili-flavored beans. Humphrey Bogart used to buy them 10 cases at a time. And Grace Kelly and Lyndon Baines Johnson have both made special orders for the beans -- not to mention thousands of ordinary Americans like me who wouldn't be caught without a couple of cans in the kitchen cabinet.
But it now looks like Fort Worth will be losing this bit of its culinary history. The corporate giant, ConAgra, has owned the brand since 2000, and they have now decided to move the canning of Ranch Style Beans to factories in Ohio and Tennessee.
They say the Fort Worth plant is outdated, and it is cheaper to move the production than to refurbish the old plant or build a new one. They are probably right, but that doesn't make me or the 121 workers losing their jobs feel any better.
I agree with Jim Lane, attorney and former Fort Worth City Council member. He says, "This is shocking, because I've been eating Ranch Style Beans since I can remember. A lot of our heritage and history is there. We should do everything we can to keep companies like that in Fort Worth. As for me, I can't get myself to eat beans from Ohio. I guess a lot of us in Fort Worth will be cooking our own beans."
ConAgra also owns another brand that used to be made and canned in Texas -- Wolf Brand Chili, and sadly, it just doesn't taste as good as it used to taste. I guess I'm left with the probably futile hope that they don't screw up the taste of Ranch Style Beans.
Posted by Ted McLaughlin at 12:02 AM

Email ThisBlogThis!Share to TwitterShare to FacebookShare to Pinterest
Labels: Corporations, food, Fort Worth