Strongest Beer In The World 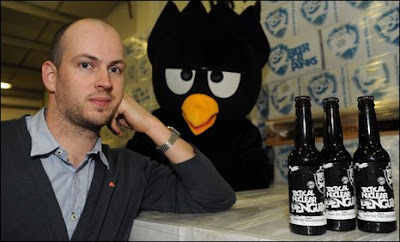 The Scottish brewery, BrewDog, had already produced a beer with an 18.2% alcohol content (called Tokyo), that had earned it the ire of anti-alcohol forces worldwide. That's more than twice the alcohol content of most beers, ales and malt liquors.
So you can imagine what the teetotalers think about BrewDog's newest product. Their new beer, called Tactical Nuclear Penguin, has an alcohol content of 32%. I wouldn't suggest trying to down a six-pack of this new beer (and a twelve-pack would be totally out of the question).
The 32% alcohol beer is in the class of hard liquor. Many whiskies and other hard liquors only have about a 40% alcohol content. The beer's label warning says, "This is an extremely strong beer; it should be enjoyed in small servings and with an air of aristocratic nonchalance. In exactly the same manner that you would enjoy a fine whisky, a Frank Zappa album or a visit from a friendly yet anxious ghost."
BrewDog's managing director, James Watt (pictured above), says, "This beer is about pushing the boundaries, it is about taking innovation in beer to a whole new level." The brewery is planning on selling a limited supply of the beer for about 30Pounds each. That's about $40 to $50 dollars depending on the exchange rate. I think the price alone would limit it's intake.
Personally, if I want something that strong I'll stick to tequila, but it is interesting that a beer could be brewed with that kind of alcohol content.
Posted by Ted McLaughlin at 12:04 AM