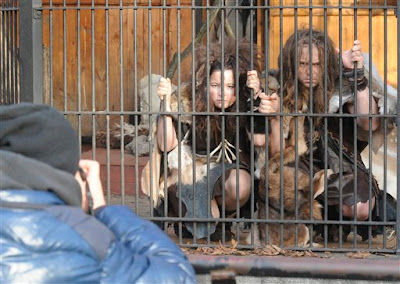 When I first saw this picture, I was convinced it was a photo of some right-wing fundamentalist teabaggers. They had obviously been locked up to prevent them from infecting others with their incredible stupidity. But alas, it seems that I was wrong.
This is actually a new exhibit at the public zoo in Warsaw, Poland. The week-long exhibit is a publicity stunt to call attention to a new play called "Caveman" that is opening in the Polish capital. It is also intended to convey the message that modern humans are not so different from their prehistoric ancestors.
I do think it's a shame that they didn't go for historical accuracy though. The caged caveman seems to be clean-shaven. Did cavemen really shave their faces? Did they even have the tools to shave (without ripping their faces to shreds)? And if cavemen did somehow have a shaving kit, wouldn't cavewomen at least have a rudimentary type of comb (so she could have done something with that awful hair).
This is really a pretty pathetic attempt, even for a publicity stunt.
Posted by Ted McLaughlin at 12:02 AM