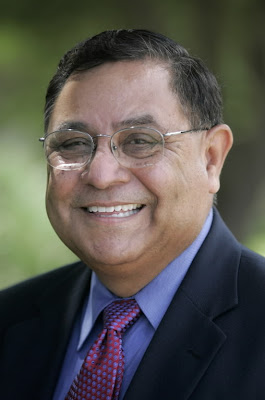 Felix Alvarado (pictured), candidate for governor of Texas in the Democratic primary, was looking forward to debating the other candidates in Dallas. Alvarado doesn't have the millions of dollars in his campaign chest that a couple of his opponents have, and this would be a major opportunity for him to get his message out to the voters.
But now it doesn't look like he'll get that chance. It seems that the "anointed one", blue dog Bill White, has decided that debates aren't necessary for Democrats to make their choice. Evidently, he believes the newspapers and blogs that say he will win the nomination, and he doesn't want to do anything that might jeopardize his "anointed" status -- like debate an opponent.
I have to wonder what White is afraid of. Does he think he might come off to the voters as boring when compared to his opponents? Or is he afraid his conservative blue dog policies won't look so good when matched with an opponent's progressive views? Either way, it's just another reason not to vote for Bill White in the primary -- a candidate too gutless to face his opposition.
Meanwhile latecomer to the governor's race, Dallas private investigator Bill Dear, is whining about have a muslim opponent in the race. Dear said, "Now we have a Muslim wanting the highest office in Texas, Governor, wanting to spend 10 million dollars and receive $1 in salary, why? According to the internet they are asking Muslims to rally and support their candidate for Governor. It is time for a change, but not that kind of change."
That sounds like a great political point in these days of fearmongering. There's only one thing wrong with it -- there is not a muslim running for governor in either the Democratic or Republican primaries. I assume that Dear is talking about Houston businessman Farouk Shami, but Shami says he is a Quaker.
It looks especially bad when one considers that Dear is supposed to be a private investigator. How good an investigator can he be, when he can't even get Mr. Shami's religion right (which is no secret). Dear has been in the race less than a week, and he's already made himself look like a complete fool.
Posted by Ted McLaughlin at 12:02 AM