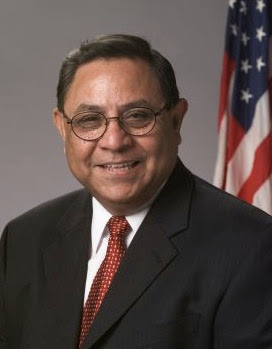 I find this to be a rather shocking development -- a public television station that thinks it knows better than the voters who should be elected governor of Texas. There are seven people who have paid their fees and will be on the statewide Democratic primary ballot in the race for governor. But the Dallas public television station (KERA) has decided that only two of them are worthy of support and votes.
The seven candidates are educator Felix Alvarado (pictured), doctor Alma Aguado, professor Clement Glenn, home builder Star Locke, private investigator Bill Dear, ex-Houston mayor Bill White and hair-care magnate Farouk Shami. But in their infinite wisdom, KERA has decided that Texas Democratic voters only need to hear from the two richest candidates. Evidently, they subscribe to the modern notion that only rich men are qualified to run for public office in Texas.
The two candidates who are rich enough to run for public office in KERA's opinion are Farouk Shami and Bill White. Farouk Shami is a Houston businessman who made a fortune selling hair care products. He's willing to spend $10 million of his own money to buy his way into the governor's mansion, but refuses to tell Texas voters what religion he follows (if any). I guess he thinks it will cost him votes.
Bill White is a Houston businessman and ex-mayor, who is the "anointed" candidate of the party leadership (who tried to get all other candidates to drop out of the race so he could have an easy path to the nomination, and were successful in getting rid of progressive candidates). Sadly, White is a conservative "blue dog" Democrat who shares none of the ideas or ideals of the national party. But the state party leadership is willing to sacrifice those ideals to elect a candidate with the label "Democrat" (even if he is a DINO).
I would have expected this kind of slanted-opinion behavior from a privately-owned television station or network (like Fox News), but it is very disappointing when it comes from a station supposedly owned by the people. After all, KERA is supported by federal funds (that is, taxes paid by all of us) and donations from ordinary citizens. It seems traitorous for them to only allow the rich candidates to debate on their station (the candidates who already have the money to buy all the publicity they need).
Public television advertises itself as the station and network that brings the people programming they can't get on other privately-owned networks and stations -- quality programming that may appeal to only a minority of television viewers. Why then, do they change that mission when it comes to politics? Why do they allow in their debate only the rich candidates declared to be frontrunners by the privately-owned media?
It may be true that the other five candidates don't have nearly the funds of the two rich candidates, but does that mean they would have nothing to offer the people of Texas? In fact, their lack of funds makes it even more important for the people's public television to give them the opportunity to show they are (or aren't) a quality candidate, possibly with more to offer the voters than the rich "anointed" or self-funded candidates.
I think when the next fund-raising period comes around for the station the people of the Dallas-Fort Worth area need to ask themselves a couple of questions. Does KERA public television really deserve a contribution? Doesn't this terrible decision to limit their debate to only the richest candidates show they have failed their mission and the voters?
Posted by Ted McLaughlin at 12:04 AM