Time For Filibuster To Die 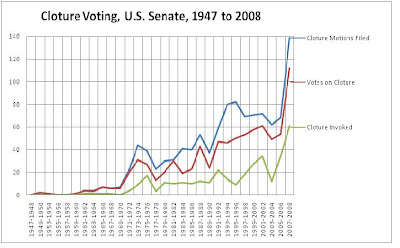 The Republican Party has decided to abuse the privilege of the filibuster in the Senate to stop everything the Democrats try to do in this session of Congress. There are 16 more Democrats in the Senate than there are Republicans, but the filibuster guarantees that the Republicans can block any bill, since it only takes 41 votes to block a bill and the Republicans have been voting as a block.
Their idea is that they will block every Democratic effort at reform, and then try to convince American voters that Democrats cannot govern. It might even work in this era when the recession has made most Americans unhappy with Congress as a whole (both parties). They might decide to change votes, because while Republicans made a lot of mistakes while in power, at least they could get a bill passed.
It is time for the Senate to either get rid of the filibuster or scale it back radically. I know there will be many (especially Republicans) who will scream that the filibuster is an honored tradition. That's not exactly true. The first filibuster didn't even happen until 1837 -- 48 years after the creation of Congress.
Furthermore, as the above chart shows, since that time the filibuster has only rarely ever been used. For the first 180 years, cloture (stopping the filibuster) never had to be requested more than 5 to 10 times a year. For the twenty years after that, it never had to be requested more than 50 times in a session. It is now necessary to request cloture more than 140 times a year, and I expect the Republicans will push that up even further this year.
The simple fact is that Republicans are abusing that "tradition". As David Axelrod said, "The Republican strategy in the Senate is to turn 50 into 60, in other words no longer do you need a majority to carry the day in the Senate. We need to call that out, and they need to explain to the American people whether throwing a wrench into everything at a time of national emergency is the appropriate policy."
There are even some people who think the filibuster is unconstitutional. Tom Geoghagen laid out three reasons in the New York Times why he thinks it has always been unconstitutional. It was just not misused enough until now to worry much about it. Here are Geoghagen's three points:

First, the Constitution explicitly requires supermajorities only in a few special cases: ratifying treaties and constitutional amendments, overriding presidential vetoes, expelling members and for impeachments. With so many lawyers among them, the founders knew and operated under the maxim “expressio unius est exclusio alterius” — the express mention of one thing excludes all others. But one need not leave it at a maxim. In the Federalist Papers, every time Alexander Hamilton or John Jay defends a particular supermajority rule, he does so at length and with an obvious sense of guilt over his departure from majority rule.

Second, Article I, Section 3, expressly says that the vice president as the presiding officer of the Senate should cast the deciding vote when senators are “equally divided.” The procedural filibuster does an end run around this constitutional requirement....

Third, Article I pointedly mandates at least one rule of proceeding, namely, that a majority of senators (and House members, for that matter) will constitute a quorum....It would be illogical for the Constitution to preclude a supermajority rule with respect to a quorum while allowing it on an ad hoc and more convenient basis any time a minority wanted to block a vote. Yet that is essentially what Senate Rule 22 achieves on any bill that used to require a majority vote.

Constitutional or not, Senator Tom Harkin (D-Iowa) has a proposal to rein in the abuses of the filibuster rule. Harkin's new filibuster rules would still require a 60 vote majority on the initial request for cloture. If that failed, a second vote could be held two days later and would only require 57 votes. If that also failed, only a 54 vote majority would be required two days later. A fourth and final cloture vote could be held after another two days and would only require a simple majority.
Harkin's proposal should be adopted, but I doubt that it will be. The Republicans will oppose it en masse, and the Democrats are too gutless to make a real fight over it (especially the blue dogs).
Posted by Ted McLaughlin at 12:04 AM