Was The Massachusetts Election Stolen ? 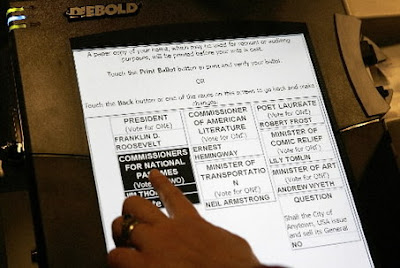 It's over in Massachusetts and soon they will be sending a Republican to the Senate to fill the seat of Edward Kennedy. But the excellent web site Black Box Voting has raised some questions about the accuracy of the election returns. It seems there is a significant discrepancy between hand counted ballots and electronically counted ballots.
This is a very unusual anomaly for a fairly held election. For instance, when the hand counted ballots and the electronically counted ballots were compared in Maine's recent election, they showed very similar percentages on the gay marriage question. This is the norm, but it is not what happened in Massachusetts.
That state had 71 hand counted location, 91 ES&S locations, 187 Diebold locations and two locations with some kind of optical scanners. Here are the results for the different kinds of locations:
HAND COUNTED
Coakley 51.12%..........Brown 47.77%
Coakley 32,247..........Brown 30,136
ES&S COUNTED
Brown 53.64%..........Coakley 45.31%
Brown 332,812..........Coakley 281,118
DIEBOLD COUNTED
Brown 51.42%..........Coakley 47.61%
Brown 791,272..........Coakley 732,633
When you add this to the locations that reported late (2 1/2 hours or more), it is cause for some raised eyebrows. The hand counted locations had 8.45% of their locations reporting late. The ES&S locations had 13.2% of it's locations reporting late, including two locations that were the last locations of any kind to report statewide. Diebold had 12.83% of their locations reporting late.
Correct me if I'm wrong, but wasn't one of the main selling points for electronic voting the fact they they would be counted and reported much faster than hand counted ballots? Why didn't that happen in Massachusetts? Both types of electronic voting machines had a larger percentage of late ballots than the hand counted ballots.
All of the electronically counted locations should have been reported in less than an hour. What was happening in these precincts that made them take over 2 1/2 hours to report their results?
None of this actually proves that Brown did not win the election, but it is enough to raise some questions. Did Brown win the election? We may never know for sure, because Coakley wimped out and conceded before all the votes were even reported. Personally, I would feel better about the results if a hand recount had been requested.
Posted by Ted McLaughlin at 12:02 AM