The Queen Of Hypocrisy 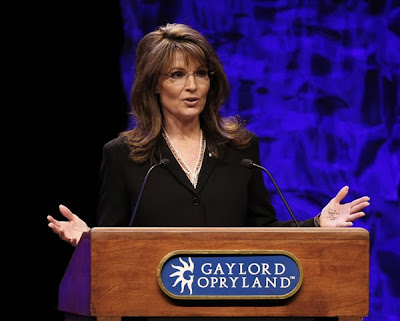 According to the Oxford American Desk Dictionary, the definition of hypocrisy is (1) false claim to virtue, insincerity, pretense and (2) deceit, duplicity, playacting, phoniness. Frankly, this definition could have been written expressly to describe Sarah Palin. The things she takes Democrats to task for, she finds perfectly OK when done by a Republican (or herself).
Take for instance her dual views on the use of the word "retarded". It's not a nice word and is usually used to belittle or make fun of someone. With a Down's Syndrome child in her family, it is easy to see why she was offended by Rahm Emmanuel's use of the word to belittle his political foes. I was also offended, as I'm sure many Americans of all political views were.
But if the word was offensive for Emmanuel to use, then it should be equally offensive when used by others -- regardless of their political beliefs. But not for Sarah. When she was questioned about Rush Limbaugh's repeated use of the word to belittle his political foes (the same way Emmanuel used the word), she found it was perfectly OK for Limbaugh to use the word to make fun of others. She said he was just doing "satire".
But in reality, the only difference between the two is one is a moderate Democrat and the other is a conservative Republican. That is hypocrisy. Here in Texas, one of Governor Perry's aides also used the word in the same way Limbaugh and Emmanuel did. She condemned his use of the word, but did not demand his resignation (as she did of Emmanuel).
The only difference -- one is a Republican aide and the other a Democratic aide. That is hypocrisy. And we have yet to hear her criticize Ted Nugent's vile use of the word (even though she shared a stage with him in San Antonio yesterday). Again, that is hypocrisy.
This last weekend, Palin appeared at the Teabagger convention in Nashville, where she gave a speech and answered questions in a scripted Q & A session. As the picture above shows, she scribbled some notes on her hand to remind herself of what she wanted to say, and used these notes to answer questions (note the writing on her left hand that says energy, tax, lift American spirits and budget cuts).
There would not be anything wrong with that, except for the fact that she has repeatedly made fun of President Obama for using a teleprompter. Is there really any difference between putting notes on your hand and using a teleprompter (since they serve the same purpose)? Once again, this is hypocrisy.
It seems that Palin has two different standards for Democrats and Republicans. She demands politically correct speech from Democrats, but is willing to tolerate any kind of speech from Republicans. She has given up fairness to embrace hypocrisy.
Posted by Ted McLaughlin at 12:04 AM