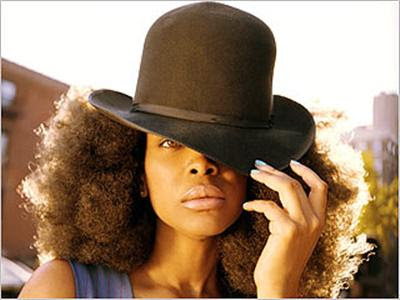 On March 17th (St. Patrick's Day), R & B singer Erykah Badu (a Dallas native) took off all her clothes near Dealey Plaza in the West end of downtown Dallas. She did this for a video of her song "Window Seat" on her newly released album New Amerykah Part Two: Return of the Ankh.
The video shoot was very low key, using only one camera and one take. As she walks down the sidewalk, she removes all of her clothes. When she reaches the point on Elm street where JFK was shot in 1963, a rifle shot is heard, her head snaps back and she crumples to the ground.
Ms. Badu (pictured) said she was making a statement against "groupthink". She went on to say, "I was petrified while shooting this video. . .but liberation began to set in. I conquered many fears in that few moments. I been naked all along in my words, actions and deeds. That's the real vulnerable place."
The Dallas police said Ms. Badu would not be arrested or ticketed for the public nudity, because no one in that area at the time was upset enough to call the police. But now, a week later, it seems that city officials are getting upset. They are saying she broke a city ordinance by failing to get a permit to shoot the video.
That statement is more than a bit disingenuous, since they know full well that they would not have given her a permit to shoot a nude video in Dealey Plaza. The "guerilla shoot" was the only way the video could have been done.
Frankly, I just find the incident humorous. Our puritanical society makes far too much of being offended by nudity (and sex too). It happened and it's over. It's silly to try and make a big deal out of it a week later. I will admit though that even though public nudity doesn't offend me, there aren't many people I would really care to see naked, and I'm sure no one would want to see me that way.
What do you think? Were Ms. Badu's actions offensive and culturally horrible? Or is this just much ado about nothing and not worth worrying about?
Posted by Ted McLaughlin at 12:02 AM