Back To The Stone Age 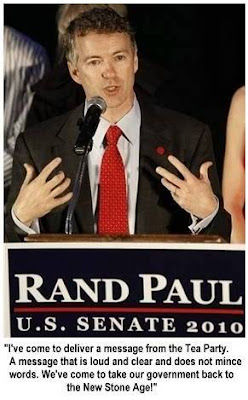 Found at the hilarious site of BartCop. Meanwhile, the GOP tried to pass off Rand Paul's racist statements as a "rookie mistake". Senator Lamar Alexander compared it to baseball saying, "Even a very good baseball player sometimes has a hard time going from Triple-A to the Major Leagues." I tend to agree. Paul made the mistake of actually telling people what he really believed (and it was scary indeed). An experienced Republican politician never tells the truth -- they tell people what they want to hear.
Posted by Ted McLaughlin at 12:07 AM