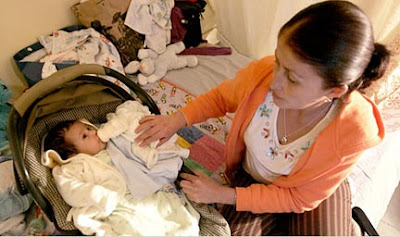 In the last post I wrote about Rand Paul, the teabagger Republican candidate for the U.S. Senate from Kentucky, I said I didn't know how Paul could go any lower than he has already done but I was sure he'd find a way to do it. I was right. After years of defending a strict constructionist view of the Constitution, Paul's newest desire is to ignore parts of the Constitution that don't agree with his new teabagger views.
You may notice that I no longer call Paul a Libertarian. That's because his new teabagger philosophy has required him to abandon a belief in the constitutional freedoms that Libertarians cherish (and form the basis of their philosophy) -- things like the right of women to control their own bodies, the absolute right to religious freedom (and the right to be free from religion), the right to possess and use drugs, and a belief that America should not use it's military power to engage in nation-building or intervene in the affairs of another country.
Now Paul has decided that the United States government should have the right to ignore certain parts of the Constitution, especially the parts pertaining to citizenship. Due to his extremely poor performance in several press interviews recently, Paul has been avoiding more interviews with the American press (including canceling an appearance on Meet The Press).
However, I guess Paul decided it wouldn't hurt him to do an interview with a Russian television station. He was wrong. In that interview, he told the Russian television audience that not all people born in the United States should have the right to citizenship (especially if they were born to a mother who was not a citizen).
Section 1 of the Fourteenth Amendment to the United States Constitution says, "All persons born or naturalized in the United States, and subject to the jurisdiction thereof, are citizens of the United States and of the State wherein they reside." This section is not only in plain English, but its meaning is very clear. In addition, at least two Supreme Court cases (U.S. v. Wong Kim Ark and Plyer v. Doe) have clearly established that all persons born in the United States are citizens. This is settled law.
What makes Paul's position even worse is that other stances he has taken, including his view that businesses should have the right to discriminate against minorities and the disabled, is (according to him) because the Constitution doesn't give the government the right to prohibit it. He has also claimed that every law passed by Congress should quote the part of the Constitution that allows Congress to pass the law.
How can he now suggest that part of that Constitution be ignored? Frankly, it just lends credence to the view that Paul is a racist, and cares very little about the Constitution unless he thinks it can support his racist views (which it doesn't). Is there any doubt that the babies whose citizenship he wants to disqualify are brown babies from Mexico, and not white babies from Canada?
There are still several months until the election. How many more political blunders can Rand Paul commit in that time? I have a feeling they could be virtually endless.
Posted by Ted McLaughlin at 12:02 AM