No New Oil Wells In The Gulf ! 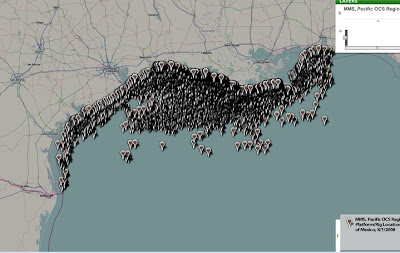 Finally someone has taken some action to stop the insanity of off-shore oil drilling in the Gulf of Mexico. Yesterday an environmental group, the Center for Biological Diversity, filed suit in the Fifth Circuit Court of Appeals in New Orleans requesting a stop to any new off-shore drilling. In light of the current ecological disaster caused by BP and Transocean (and Halliburton), that makes imminent sense.
There is a federal law (the National Environmental Policy Act) that requires a full environmental analysis before any drilling can proceed. However, the federal government's Mineral Management Service (MMS) has routinely been exempting drilling companies from fulfilling the requirements of this law. In fact, BP was given an exemption by the MMS for their disastrous well that is still pouring thousands of barrels of oil into the Gulf every day.
It gets worse. In the past 60 days, the MMS has granted another 49 exemptions from the environmental law to companies for new off-shore wells (many of them granted since the BP disaster). It is only right that President Obama has fired the head of the MMS (who had to be brain-dead to keep giving out the exemptions). It is these newest drilling permits that the Center for Biological Diversity is trying to stop in court.
Maybe the president is finally coming to his senses. He had approved a large amount of new off-shore wells, but now admits he was wrong. He said he had thought the oil companies had the appropriate safety precautions and knew what to do in case of an emergency like the BP disaster.
It has since become clear to everyone that the oil companies don't have the remotest clue about how to handle an off-shore disaster. And it's not just BP -- it's all of the companies. If any of them knew what to do, you can bet they would have given that knowledge to BP by now. They know that the public's bad feelings about the drilling and any new laws and drilling regulations will affect every single oil company.
It is time to stop the off-shore drilling (at least stop giving new drilling permits). Saving a few pennies at the gas pump is not worth the destruction of our environment, and the drilling ban should not just be in the Gulf of Mexico, but in all coastal areas.
The picture above was taken from the blog called Walled-In Pond. It shows a map of the 6,357 oil platforms in the Gulf of Mexico (each one of them a potential disaster in the making).
Posted by Ted McLaughlin at 12:02 AM