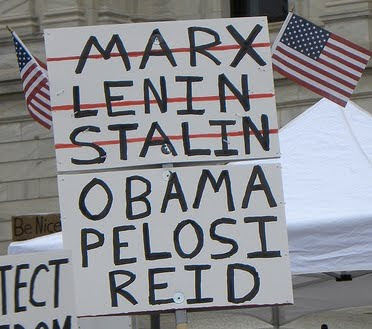 The blogger over at Zero Energy Construction has (with his tongue planted firmly in his cheek) revealed the ultra-secret left-wing conspiracy involving the 2010 U.S. census. I know all you liberal, socialist, pinko, progressive, commie, leftist, bleeding-heart, gay and minority-loving, tree huggers will find it hard to believe that our secret has now been exposed to the blinding light of day, but it is true. As proof (and with my own tongue planted in my own cheek), I am hereby reprinting the treacherous post below. Enjoy!
Dear Tea Party Friends,

Whatever you do, do not fill out and return the census survey. Yes, it’s only 10 questions, and it only takes 10 minutes, but that’s not counting the years you will spend in forced labor camps once Nancy Pelosi rounds up everyone who bought Going Rogue and puts them to work in the medical marijuana fields. Think of your children, who will be confiscated by liberal shock troops (black liberal shock troops) and used to feed the giant underground blast furnaces that President Obama has installed beneath the White House to power his…

Some people, even a few in your own party, will try to tell you that the census is just a benign headcount that collects demographic information about the country. Some may even say that the census is an important way to make sure you are fully represented in Congress, and that if you don’t fill it out, your party might lose seats when the congressional district lines are redrawn.

It is very important that you hit these people with sticks.

The 2010 census is an unprecedented conspiracy of epic proportions, way worse than the 2000 Census or the 1990 Census. It’s a complicated plot, with layers upon layers of deception and misdirection, but let me see if I can explain it as simply as possible. The census process is composed of three steps:

Distributing the census survey to every home in America.
Encouraging all Americans to complete and mail back the survey.
Race war.
This is the truth they don’t want you to know. Whether you’re a Republican, a Tea Partier, an NRA member, a Texan, or you just plain hate the Jews, it is very important that you do not, under any circumstances, complete the 2010 census.

Army of bat robots. That’s what the underground blast furnaces power. The ones Obama is going to feed your children to. For real.