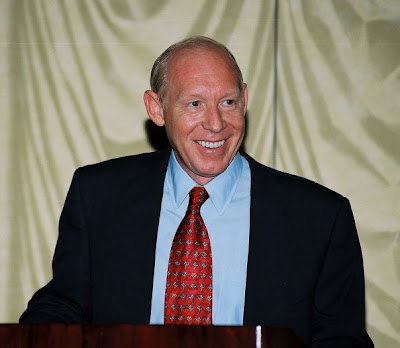 The high point of the state Democratic convention for many of the convention delegates came on Friday night. The party's candidate for governor made his appearance and spoke to the convention. And surprisingly, he gave a pretty rousing speech. Normally White's speaking style could put a charging bull elephant to sleep (and that might be his best chance of winning -- to lull the Republicans to sleep on election day).
But Friday nights speech actually had a little oomph to it. It was short on specifics and long on attacks on Perry. And of course, he kept all his promises to vague generalities. But then, this is what a convention speech is supposed to do. He does not have to sell most of the convention delegates on his candidacy -- they are already on board. This speech was not to convince, but to energize -- to get these party regulars energized enough to go out and do the hard work needed to make his (and other Democrats') candidacy viable in the coming election.
I guess he was successful in the effort to energize his supporters, because I heard a lot of the convention delegates talking the next morning about what a great speech it was. Now all he has to do is convince the voters of Texas and that's going to be a lot harder. A recent poll showed White and Perry tied at 43%. I'm not sure this isn't just an anomaly that will disappear with the next poll, but hopes are running high in the party right now.
Democrats want to believe they can grab some of the statewide offices back this year. After Friday night's speech, many are feeling a little better -- a little more hopeful about their chances.
Posted by Ted McLaughlin at 12:02 AM