I Meet Senfronia (By Accident) 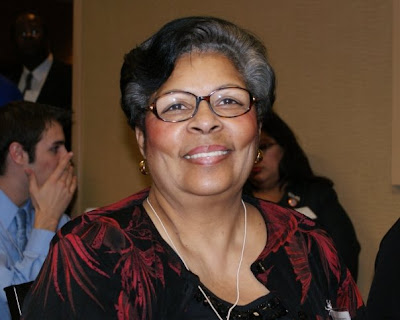 I have a confession to make. I am a political junkie. That won't surprise regular readers of this blog, but it is why I am currently attending the state Democratic convention. I haven't missed one of these conventions in years (either as a delegate or with a press pass). This year I am lucky enough to be doing both. The good Democrats of Potter County were kind enough to select me as a delegate and the state party once again credentialed me as a member of the press (I know -- they have a rather loose definition of press).
The convention is being held in Corpus Christi this year, and believe me, that's a long way from Amarillo. I left Amarillo about 7:00am yesterday, and three plane rides and several hours later I finally arrived in Corpus Christi. The plane rides were from Amarillo to Dallas, Dallas to Houston, and Houston to Corpus Christi. It was on the last leg of that journey that I had a rather exciting accidental meeting (remember -- I'm a political junkie).
As passengers were boarding this rather distinguished lady sat down next to me. I didn't think much about it -- after all, who expects to meet someone they admire this way. I was just glad it wasn't some 300-pound behemoth who would take up his seat and half of mine. Then another lady who was boarding put her hand on the lady's shoulder and said "Senfronia" in a sing-song voice before going on down the aisle.
I was flabbergasted (and embarrassed that I hadn't recognized her). But just to make sure I tapped her on the arm and asked her if she was Rep. Senfronia Thompson, a member of the Texas legislature. She politely replied that she was and shook my hand as I introduced myself.
We exchanged some polite banter about politics, and then she found out I was recently retired from a juvenile justice career with the state. She asked me point blank what needed to be done in the area of juvenile justice. Never being one who was too shy to give my opinion, I launched into a long discourse on the subject. Now most politicians would have interrupted me and told me what they thought needed to be done. Ms. Thompson didn't. She listened intently as though I might actually have something important to say. I must say I was impressed with her.
Now, I was already a fan of Rep. Senfronia Thompson. I even posted a couple of years ago that I thought she would make a great Speaker of the Texas House (and I still believe that). But she has climbed even higher in my estimation. I can now tell you that she is as nice as she is capable (and she is very capable). And she is willing to listen.
Ms. Thompson, I hope I didn't bore you too much and I appreciate your kindness. You really made this political junkie's day.
Posted by Ted McLaughlin at 12:06 AM