Afghan War Gets Even Worse For U.S. 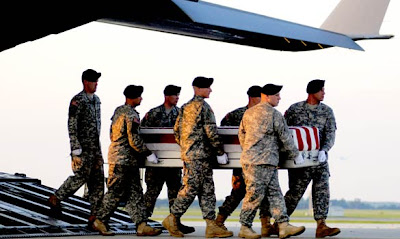 It looks like the war in Afghanistan just keeps getting worse for the United States and its coalition partners. In June, a total of 60 American soldiers died in Afghanistan. That was a record number of deaths for one month for the United States in the nine-year war. But it was a short-lived record.
Last Thursday three more U.S. soldiers died in an explosion in Afghanistan. That upped the death toll for United States soldiers to 63 for the month of July -- a new record. After nearly nine years of war a person would hope things would finally be getting better in this seemingly endless war, but if the death toll is any measure (and it certainly is), then things are definitely not getting better.
U.S. officials tried to put a good face on the terrible numbers, saying they had expected casualties to rise as they "ramped up the war against the Taliban". That just makes me wonder what they hell have they been doing for the last nine years, if not ramping up the war against the Taliban?
The truth is that our leaders learned nothing from the experience in Vietnam in the 60s and 70s. They evidently thought Vietnam was an anomaly that couldn't happen again. They were (and are) wrong. It may be the desert mountains of Afghanistan instead of the jungles of Vietnam, but it is exactly the same situation. How much longer will it be before our leaders (in both parties) realize this?
It's time to bring our soldiers home from Afghanistan (and Iraq) -- all of them.
Posted by Ted McLaughlin at 12:04 AM